In 2 Corinthians 10:3-5, the Apostle Paul explains that the battles that we fight are not physical, but spiritual battles. As a result, the weapons we use are not swords or guns, but rather truth and ideas. In the ancient world cities were surrounded by high, thick walls. The walls were the first line of defense. Inside the walls, however was a stronghold where the city stored supplies to outlast a siege. The stronghold was also a place to which the city leaders could retreat if the walls were breached until help would arrive. If the stronghold was brought down or breached, all was lost and those inside had to surrender to survive.

This is the word picture Paul uses to describe the tactic Christians should use when interacting with unbelievers. We should try to discern the authority on which the unbeliever relies. For some people, the authority is human reason; for others, science is their authority. Other authorities on which people rely include religion, a particular philosopher, parents, or their own experience. On whatever authority the unbeliever bases his ideas and values, that is the stronghold in his life.

Once the stronghold is identified we can begin to challenge that authority. By undermining the authority in which he trusts, we take away from him the grounds of his objections to the gospel. This approach echoes the wisdom saying in Proverbs 21:22, which says, “A wise man scales the city of the mighty, and brings down the stronghold in which they trust.” Even though an intellectual stronghold can be difficult to bring down, Paul reminds us that Christians have been given divine power to do so. This power is not a magical power, but is found in the arguments themselves. As he says in verse 4, we “destroy arguments.” That is, the arguments we use to defeat the objections raised against the Christian faith are powerful by virtue of being true. Truth is always more powerful than falsehood.

In our conversations with unbelievers we are seeking to show the weakness of the unbeliever’s worldview. We do this with the confidence that even though we can’t always see weakness in his arguments at first, they are there. Only the Christian faith can coherently answer the deep questions of meaning in life. The more we interact with unbelievers and seek to identify their strongholds, the better we become at identifying them accurately. When we identify them accurately we can show how the stronghold cannot stand the scrutiny of truth. But how do we do this?

In the next post we look at how to ask questions that reveal the true authority in the unbeliever’s worldview. The intent is to help him see that what he trusts epistemologically is self-contradictory, and cannot stand up to scrutiny.

In response to the idolatrous exchanges mentioned in the previous post, Romans 1 tells us that God, in judgment, “gives the unbeliever over” to punishment. This word is used three times in Romans 1, each time in response to one of the exchanges. It is used in the Gospels to describe Pilate handing Jesus over to be scourged, and Judas handing Jesus over in betrayal. It means “to hand over, to give back, or deliver into the hands of.” In other words, God’s response is to give those who suppress the truth into the hands of their unbelief. The unbeliever is forced to live with the consequences of his rejection of the truth. What are these consequences?

God hands the unbeliever over to impurity and disgrace. (v. 24, 26, 28). One of the common characteristics of those who suppress the truth is they specifically don’t want God limiting their sexuality. As a result, God gives them over to the lusts of their hearts to the extent that they become “unclean” and “without honor.” The idea of being unclean or defiled hearkens back to the Old Testament need to become ritually clean before an Israelite could approach God. Until he cleansed himself according to God’s directions, the Israelite remained impure and could not approach God. On the other end of the scale was the pagan worshiper who defiled himself with his debased worship of his gods, brutal sacrifices, and gross immorality. The pagans in Canaan were so inhuman that the land “vomited them out” (Lev. 18:28). When God hands a person over to the lusts of his heart, he has to live with the resulting uncleanness.

God also allows unbelievers to dishonor their bodies among themselves and become slaves to their passions. This speaks of the lack of dignity that comes from rejecting God’s ways. By rejecting the glory of God, the unbeliever becomes undignified as he who is made in God’s image worships animals, birds, and animals that creep along the ground (v. 23). Their minds dwell on the most worthless and beastly thoughts. The list that concludes Romans 1 details the extent of the baseness with twenty-one descriptions of the wickedness of those who suppress the truth. Paul concludes with a stunning statement—not only do those who do such things know they are deserving of death, they encourage others to do them too.

This extensive description of unbelievers is a stunning contrast to the way unbelievers, and often Christians, view non-Christians. Things are far worse for the unbeliever than he ever imagines. Yet, this makes the Good News all the more glorious. The more a person accepts God’s assessment of his heart and estrangement from God, the closer he comes to repentance and faith in Christ. To soften the blow of this description is to blunt the call to repentance, making salvation more difficult to obtain. Only with the conviction of his rebellion and idolatry will the unbeliever be able to see the beauty and rationality of the gospel.

In the next post, we return to the Christian’s strategy for evangelism and apologetics. We will see that God calls us to confront the intellectual and ethical fortresses that people construct in order to resist the knowledge of God that rises up in them every day. 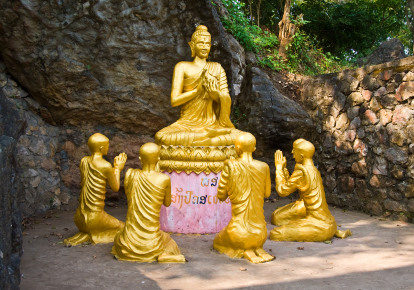 In order for an unbeliever to continue to deny what is obvious and plain, he must bargain with his heart and mind. Romans 1:23 calls this an exchange. This is a word drawn from Greek marketplace language where one object is traded for another, presumably of equal value. The irrationality of unbelief, however, means that something of immense value is exchanged for another thing of far lesser value. Three exchanges are mentioned in Romans 1:23-26. In response to each of these bad trades God levies a judgment against them.

An example helps us understand this. Let’s say a soldier goes off to war and brings with him a photo of his wife. He stares at the picture every day because it gives him courage and hope. He may even speak to the picture, so he feels like he is talking to her. When he returns home, we would expect him to set aside the picture and focus on his wife, talk to her, and interact with her. If he kept staring at the photo of his wife while she was present, we would question his sanity. The real is present in all its glory. The image is not needed and doesn’t compare to the glory of the real person.

Whether we talk about ancient idols (such as gold statues of animals) or modern idols (career, cars, cash, popularity, power, fame), anything we worship other than God is a mere image, something of greatly diminished glory. We were not made to worship created things, but rather the Creator. When we worship anything less than the God in whose image we are made, we diminish our dignity and endanger our humanity, making us liable to becoming inhuman. This is exactly what is described in Romans 1:31, 2 Tim. 3:2-5, and 2 Pet. 2:12, where inhuman and animalistic behavior marks the worst of those who worship created things.

This exchange lies at the heart of those who can accept lies they know to be untrue. When a person rejects the Christian God for another religion, or for non-belief in any deity, he accepts what he knows to be a lie. Sometimes believing a lie is easier psychologically than facing the truth. Sometimes when parents are told that their child has died, they respond by saying, “No, that’s not true. It can’t be!” They deny what they know to be true because the truth is to awful to consider.

In the case of unbelief, however, the exchange of the truth for a lie is not rooted in grief, but in rebellion. The unbeliever will accept anything other than the Christian God. This is one reason why there are so many religions in the world. Each is a variety of the human heart saying, “I will believe anything but the truth of who God is.” The ultimate expression of this foolish rebellion is denying God altogether (Ps. 15:1). However, atheists, agnostics, and skeptics don’t escape belief and worship by denying God. They simply worship other, less visible idols—reason, science, wealth, and more. As G. K. Chesterton said, “When men choose not to believe in God, they do not thereafter believe in nothing, they then become capable of believing in anything.” While nonbelievers often regard Christians as irrational, their rejection of what is obviously true makes them truly the irrational ones (1 Cor. 1:18-25).

In this passage, homosexuality is featured as an illustration of the unnatural. Paul is not saying that homosexuality is the worst sin one could commit, but rather that homosexuality is the most vivid example of unbelievers declaring something to be good which is so obviously contrary to the design of nature. Homosexual acts are attempts to bring a union similar to sex within marriage, but without the benefit of anatomy designed for such purposes. At the most basic level of human anatomy is the complementarian design of heterosexual sex in which body parts fit and are capable of reproduction. Homosexuality cannot fulfill God’s intention because it goes contrary to His design.

All unbelief results in some form of unnatural behavior. In the Old Testament, God reminds Israel many times that the idols they worshiped were made out of the same stuff as their firewood. To burn one half of a log in the fire and carve the other half into an idol for worship goes against nature, which tells us that trees cannot hear, speak, walk, or do anything else that only God can do (Ps. 115:1-8; Is. 44:9-20).

Unnatural behavior is a hallmark of someone who has severely suppressed the truth, as is rejecting the truth for a lie and preferring images to real glory. Each of these exchanges is clearly a loss for the unbeliever. He moves farther away from relationship with God and with the life God intends. The more the unbeliever makes these exchanges, the further he descends into blindness (Is. 59:1-13; 2 Cor. 4:4).

In the next post we will examine God’s response to the idolatrous exchanges unbelievers make in their denial and rejection of God.