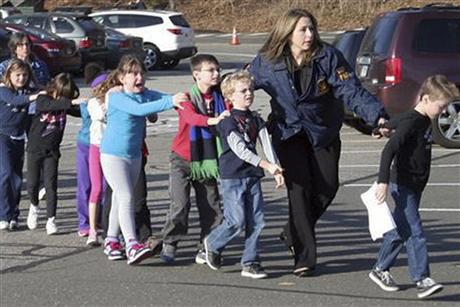 ay, my wife and I pray with each of our four children before they leave for school.  Some days, we simply ask God to help them with a particular assignment.  Other days, a classmate might be the subject of our petition.  But with each prayer, we always ask God to keep our children safe.  Beforethe “Amen” has barely left our lips, the kids are racing for the door to catch the bus and embark on their school day.

As parents, we experience two polar opposite emotions as we watch our children board a school bus: joy and fear.  There’s joy that comes with watching your child grow and mature as they go to meet their educational challenges for the day.  But, at the same time a quiet fear emerges as we release them to a world that is neither safe, nor kind.

That’s why Friday’s inexplicable tragedy in our own state shakes us to the core.  Every act of terror evokes sympathy, but it’s aentirely different story when the massacre takes place just 100 miles or so from here.  What mom or dad in this area, or anywhere for that matter, cannot help putting themselves in the shoes of the 20 sets of parents who went to their child’s school yesterday, not to pick them up for early dismissal, but to identify their lifeless body?  What educator does not mourn for their colleagues whose lives ended alongside their peers and pupils?

In my opinion, Governor Dan Malloy nailed the motives behind the events in Newtown when he said, “evil visited this community today.”  Can there be a better explanation for a 20 year-old-man killing his mother in her sleep and then arming himself to go attack an elementary school?  Is there a greater act of cowardice?  What motivates someone to express his anger at life by killing kindergartners and first graders?

Events like this remind us that our world is not safe.  Stiffer laws, greater police presence and new safety procedures may minimize risk, but they are powerless to eliminate evil itself.  Sadly, the image of the firehouse adjacent to Sandy Hook Elementary School adorned with Christmas lights and wreathes is a cruel and ironic symbol of the season.  Christmas is a time where we’re supposed to celebrate peace.  For the residents of Newtown, this Christmas will be marked by pain.

Yet, the Christmas story has the capability of speaking to this tragedy.  In an often neglected portion of the Christmas story, there is an account of a madman who murders innocent male children in the little town of Bethlehem (Matt. 2:16-18).  The mothers of this ancient borough just outside Jerusalem had a day not unlike the one 20 mothers in Newtown had on Friday.

But, there is a significant difference between these two acts of terror.  Bethlehem’s assassin was not a deranged citizen, but a maniacal ruler.  The mothers of Bethlehem could look neither to politicians, nor to police for safety.  In a harsh twist of fate, these very people were the ones directly responsible for their misery.  Matthew 2:13 records their sorrow: “A voice is heard in Ramah, weeping and great mourning, Rachel weeping for her children and refusing to be comforted, because they are no more.”

Why did Herod the Great inflict such suffering upon his subjects?  He was after a baby boy who he perceived to threaten his rule.  The news that one had been born “The King of the Jews” in Bethlehem led this despot to kill many to ensure that he murdered just one.  Herod’s assassination plot on King Jesus failed, but it left much carnage in its wake.  Mary and her baby may have escaped, but their deliverance was only temporary.

The angels’ famous Christmas greeting to the shepherds outside Bethlehem, “Glory to God in the highest, and on earth peace, good will toward men,” did not become a reality in Jesus’ day, nor has it in ours either.  The birth of Jesus represents the announcement of God’s plan for defeating evil and making peace and good will the norm on this earth.

Jesus’ life and more importantly His death were Phase 1 of a two phase mission of bringing peace to this war-torn world.  Jesus’ resurrection three days later shows death and evil hold no power over God.  Yet, evil continuesto hold sway over us.  Mothers continue to grieve for lost children while fathers struggle in vain to provide 24/7 protection for their families.  All of humanity groans as we await the final step in God’s plan.

What is that plan?  When will God finally accomplish it?  The next to last chapter of the Bible explains Phase 2 of Jesus’ mission.  Jesus, the one called “Emmanuel,” meaning “God With Us,” having finally vanquished Satan and his evil foes, will come to rule and reign on this earth for all to see.  What will characterize the reign of “The King of the Jews”?  Revelation 21:3-4 gives us a description:

“And I heard a loud voice from the throne saying, “Now the dwelling of God is with men, and he will live with them. They will be his people, and God himself will be with them and be their God. He will wipe every tear from their eyes. There will be no more death or mourning or crying or pain, for the old order of things has passed away.”

So…where does that leave you and me in the meantime?  How are we to live in such a cruel world?  How can we find the peace we need to function in a world where madmen roam?  How can we keep our anxiety at bay as we kiss our kids goodbye and send them on their way to school each morning?

I believe Mary the mother of Jesus sets an example for all of us to follow.  She holds her baby tight, but entrusts Him to the care of God the Father who holds the future of her son in His hands.

In R. Kent Hughes’ book, Disciplines of a Godly Man, he challenges men to discipline their minds.  Specifically, he encourages godly men to read the great classics of literature.  As a result, I have taken his challenge to heart.  Over the last decade, I have read a couple of great works of literature each year.

Surprisingly, I have come to love the great 19th Century Russian writer Fyodor Dostoevsky.  Although his voluminous novels can be daunting, they are truly a delight.  Specifically, I enjoy the Christian themes, his existential musings and uncanny ability to put me directly into the mind of his characters.

Recently, I tackled Dostoevsky’s most autobiographical novel, The Idiot.  Unlike the protagonist in his most famous novel, Crime and Punishment, The Idiot’s protagonist, Prince Myshkin, is a truly honorable man living in a dishonorable world.   As a result, every character in the novel pivots off of the very humble, yet naïve Prince Myshkin as they interact with him in an almost exclusively negative way.

Jesus Christ factors into The Idiot in a significant, yet subtle way.  Christ’s presence is opaquely portrayed through Myshkin as a Christ figure.  However, Christ appears transparently, if not graphically as he confronts Prince Myshkin himself.  As Myshkin walks through Rogozhin’s home, his antagonist, he sees Hans Holbein’s painting The Body of the Dead Christ in the Tomb over the door.  Upon seeing it, the Prince exclaims: “A man could even lose his faith from that painting.”[1] Later in the novel, Myshkin reflects further on it:

[W]hen you look at the corpse of this tortured man, a particular and curious question arises: if all his disciples, his chief future apostles, if the women who followed him and stood by the cross, if all those who believed in him and worshipped him had seen a corpse like that…how could they believe, looking at such a corpse, that this sufferer would resurrect?[2]

As a Christian, I find Prince Myshkin’s journey through a depraved world enlightening.  He takes his faith seriously and yet at times struggles with doubt.  He lives in a reality where shades of gray are the norm.  He refuses to portray faith in simplistic black and white terms.  Perhaps, this explains why both notable atheists such as Nietzsche and Camus, and Christians alike are drawn to Dostoevsky.  In one breath, Dostoevsky’s Prince can rail against atheism and nihilism, and in another accuse the Roman Catholic Church of preaching “a distorted Christ…a counter Christ!”[3]

Moreover, as a pastor, I see uncanny similarities between Dostoyevsky’s cast of characters and the people I shepherd.  There is truly nothing new under the sun.  Natasya Filippovna’s irrational choice to run off with Rogozhin and leave Prince Myshkin at the altar is symptomatic of far too many self-destructive believers and unbelievers alike.  Those that truly love the “Natasyas” of the world hold open their arms and cry out that freedom and love await them if they would but surrender to Christ.  However, time and time again they deafen their ears and harden their hearts to Christ’s irrational message of love.  Like the characters in Dostoevsky’s tragic novel, The Idiot, the people we love choose the path of sin and reap the whirlwind.

Dostoevsky is certainly not your average beach read, but anyway, too many of us fill our minds too often with the light fare of fluffy novels, television, and YouTube videos. Consequently, the serious Christian needs exposure to Dostoevsky.  His novels will stretch the intellect as they simultaneously minister to the soul.