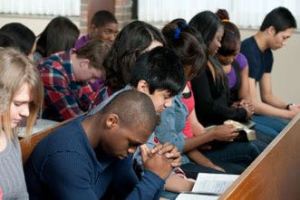 The healthy church as an institution of apologetics has the advantage of being an explanation of the gospel by its very presence. The quality of life in a gathering of believers is a startling apologetic to a world that is critical, negative, competitive, and skeptical. Within the larger context of the local church, a broad variety of personal accounts of how dignity has been restored by the gospel and how marriages have been put back together by the grace of God stand in contrast to the apparent distress in the workplace and classroom. Add to this a code of ethics that works and a sense of belonging on the one hand and of purpose on the other.

The end of apologetics is not simply to bolster the credibility of the Christian faith for the believer, but rather to break through the incredulity of the unbeliever. And while there is overwhelming reasonable evidence for the Christian faith, because in the postmodern world reason is suspect and moral and spiritual values have been reduced to relativistic opinions, the existential power of the healthy Christian community is a powerful apologetic (maybe even more influential initially than any intellectual construct we have to offer). It’s as though the truth of the gospel must be existentially perceived–at least initially–rather than rationally grasped.